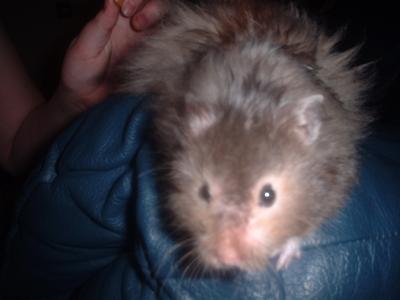 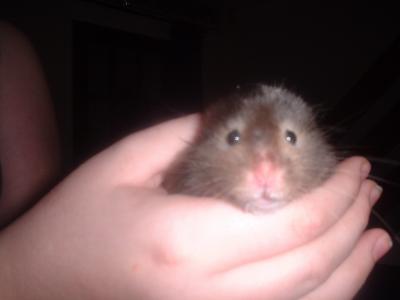 A day in his life is pretty hectic! Here's how it is:

First of all I put him into his ball, he'll run about for hours, '' bang crash!'' after that he'll have a free run about, with me following him, making sure he doesn't go under the cooker! Once I saw him climb all the way up the wall to the ceiling! After all this fun, I hide lots of treats in his cage, peach stones, nuts, lettace and his fave Cheastnuts. After he's in his cage he'll hunt out all the treats and store them in his pouches. Then he'll have a long sleep, waking up now and then for food and drink. Then when I'm in bed I can hear him in his wheel, running round and round.

After all this excitement he has a relaxing brush, he loves his tummy tickeld! Then I pop him back into his cage, which would be stored with hidded food for him to find, and his fave a chestnut! If you could see his bulging eyes! lol. Many people have said how cute he is, so soon I shall enter him into a hamster show. For now I hope the photes made u laugh as much as i did!

(Actually Jayne, from your pictures I would say you a a very nice Long Haired Sable Syrian Hamster.)