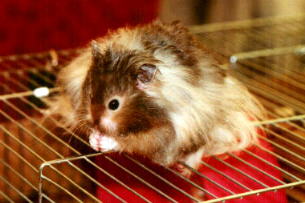 Hail Bop was born on February 14th, 1997, the same night that we first saw the new comet. With our sense of humour we though it would be nice to make it Hail (as in Hail Caesar). Hail Bop is a long Haired Sable. It is only the males that can get the very long hair. His father was Alder , a Long Haired Sable "borrowed" from Andrew Bryan of Duncton Hamstery in Birmingham. His mother was Sabine , also a Long Haired Sable from our own line of Sables.

At the age of about 3 months he started to get placed in shows and as the weeks progressed so did his placings. In September he reached his pinnacle and won BEST IN SHOW at Coombe Abbey.

Apart from his good exhibiting record he has started to get quite a reputation at displays as an EXHIBITIONIST. He really plays to his audience by running across the tops of cages, taunting their inhabitants. He also loves to be stroked and people marvel at his long flowing coat and his "spectacles". His coat is about 4 to 5 inches long and his magical attraction to people also applies to tangles.

Every day he is inspected when we are feeding and any tangles are sorted out. A full explanation of how we keep our long haired males can be found in our grooming leaflet.

Just before the picture was taken he had begged a piece of Welsh cake, together with a currant, off a sympathetic onlooker, hence him sitting still for a moment. Hopefully when we start displays again next year he will still be as keen as ever to " tread the boards", in front of his appreciative audiences.