This photgraph is copyright of the NATIONAL HAMSTER COUNCIL 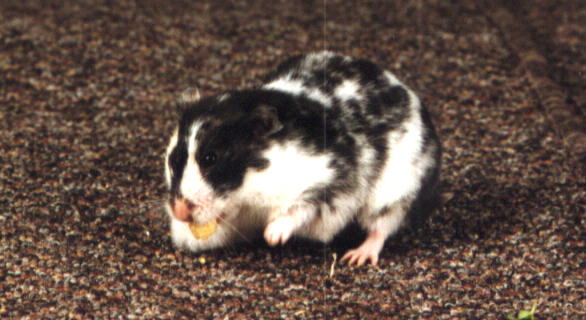 When Trio was about two weeks old we noticed that she was not quite as big as her brothers and sisters (there were 8 in the litter). On closer examination it was discovered that Trio had "lost" her front right leg. It is supposed that mum bite this off (unintentionally) either at birth or within the first day or two.This missing leg explained why she was just that bit smaller than her nest mates. As she could not hold her food properly, any nice bits of food were pinched. If you look carefully at the picture you can just see that the leg is missing.

The missing fore paw may have made looking after babies difficult so we never mated her and as she was such a nice colour we decided to hold on to her to take to displays. She was an instant success at displays and if she was put in our playbox, off she would go and jump onto a wheel and thoroughly enjoy herself. This missing limb made hardly any difference to her ability to run, either on the flat or on wheels and she seem be be completely contented.

When Trio was about 22 months old she suffered a small stroke which effected the right side of her body. She made a 95% recovery but because of the missing leg her walk was slightly wonky. She could however still feed herself (and run on her wheel). On 27th October 1996 we found Trio dead in her nest, curled up, indicating that she died peacefully in her sleep. Trio was just one week short of her second birthday so she did have a good life.