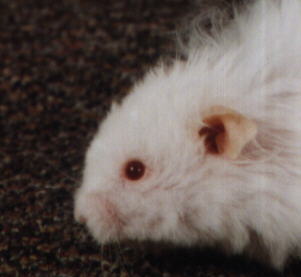 Sometime ago some people went to a pet shop to get a hamster. The choice was not very varied and they came away with two Albino hamsters, which they kept in separate cages. Tens days after they had bought the hamsters BOTH gave birth to babies. This was a big surprise but they did not panic and they raised both litters.

Sure enough two weeks later the mums gave birth to second litters. Thankfully the female baby was not pregnant and a home was found. The owners were told to bring the babies to us when they were THREE weeks old and we would try to find homes for them. There were ten survivors between the two litters and the owners found homes for four. We took the other six.

They were all short haired Albino (although some did seem to have long hair in them), so the prospect of finding homes for them seemed dim. However after two weeks we had re-homed five of them, the last one we held back as she seemed to have a mild infection and there was a discharge from her rear end. This we started treating with antibiotic.

After another two weeks she still had this discharge and her fur around her rear end was very stained, so we decided to give her a bath to clean her up. This is when we discovered that SHE? had genitals of both sexes present. After a discussion with our vet it was confirmed the she? was indeed an hermaphrodite (someone with both sex organs) and that the discharge was a problem with her? plumbing, which the vet said was not operable.

Apart from her dribbling urine all the time she (we still consider her a her) was in excellent health and it would not have been fair to put her down. IT was born around the November 12th, 1995 and has grown into a lovely large hamster. She still dribbles, which means when she is cleaned out she has new bedding, lots of sawdust and all of her cage in washed. Over the last week or two she has slowed down and some days does not finish her porridge. Hopefully she will live to well over two years old and prove that even 'deformed' hamsters can have a happy and interesting life.

It is a very common problem that occurs when hamsters are bought from pet shops. Some pet shops still have not learnt that hamsters can be sexually mature at under five weeks old. This means that a seven week old female can have her own litter in the nest.

One last thing. Think carefully before you decide to breed any hamster. Can I find homes for them all? Sometimes a hamster can have as many as 15 babies. Have you got 15 friends looking for hamsters or will your pet shop take your baby hamsters?

Today, Sunday 14th September 1997, IT passed away peacefully in her sleep curled up in her? nest.